Upon discovery of the Albany area by Henry Hudson in 1609, the Dutch claimed the area and set up two forts to anchor it: Fort Nassau in 1614 and Fort Orange in 1624, both named for the Dutch noble House of Orange-Nassau.

Kiliaen van Rensselaer, a pearl and diamond merchant of Amsterdam, was one of the original directors of the West India Company and one of the first to take advantage of the new settlement charter.

A few weeks after the arrival of the first colonists, the patroon's special agent, Gillis Hassett, secured a grant of land from the Indians, lying mostly to the north of Fort Orange and extending up the river to an Indian structure called Monemins Castle. This was situated on Haver Island at the confluence of the Mohawk and Hudson rivers. This and the earlier purchase completed the bounds of the manor on the west side of the Hudson.

The government of the Manor of Rensselaerswyck was vested in a general court, which exercised executive, legislative or municipal, and judicial functions.  Several generations of van Rensselaer's occupied what would become the Capital District.

Jonathan Hoag, settled in Nassau in 1792 and purchased several hundred acres of land on and adjoining the site of the Village of Nassau from Patroon Stephen Van Rensselaer.

The body of water now known as Nassau Lake was then named Hoag's Pond. It was created by Hoag by constructing a dam which covered "the Vlaie" or "Beaver Meadow" with water. Hoag became perhaps one of the most industrious and progressive of the pioneers of Nassau.

For more information visit the Nassau Free Library, the Town of Nassau and the Town of Schodack historians office. 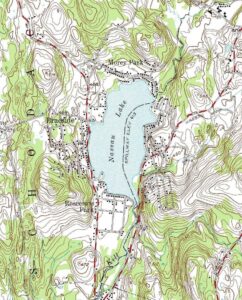 On March 31, 2006, the Town of Nassau celebrated in grand style, the 200th anniversary of its founding. The town was formed from portions of Schodack, Stephentown and Petersburgh on March 31, 1806. Its original name was Philipstown, in honor of Patroon Philip Van Rensselaer. The name was changed to Nassau on April 6, 1808.

For more info: Celebrating 200 Years of History and Counting.pdf